A few years ago, deep in the National Archives at Kew, I came across a box of letters. Submitted weekly to the Home Office, they had all been written over the course of just a few months in 1842 by Superintendent Baxter of Wellington’s fledgling police force. Alongside some local news articles from those same months, this was the the story they told…

17th May 1842, The Cock Hotel junction on the edge of Wellington. Unlike today, there isn’t a car in sight of course, yet the road is far from quiet.  Between six and seven thousand people are converging on the junction of Watling Street and the Dawley Road, headed by brass bands playing and banners waving. You’re in the middle of the greatly anticipated demonstration of Shropshire Chartism, which will soon be on its way to The Wrekin – where anxious police, magistrates and gentry will be stalking nervously. 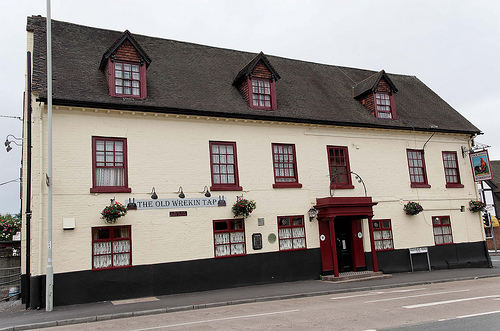 Chartism had emerged in the late 1830s as a national movement campaigning for the ‘Rights of the Charter’ – a document drawn up to demand several new rights like the right to vote, annual parliaments, the secret ballot and payment for MPs (so that not only wealthy men could afford to stand). Annual parliaments aside, the reforms they advocated are ones that we all now take for granted.

Aligned with the Chartists were Anti-Corn Law advocates, who wanted to see the abolition of the old Corn Laws which protected landowners by keeping cheap imports of corn out – and so keeping food prices high.

The Chartist meeting to be held on The Wrekin on 17th May was keenly awaited in Shropshire.  For supporters of ‘The Charter’, it was an opportunity to display how strong their support had become in the Coalfield districts and, amid the festive atmosphere, to rally yet more to their banner. For the magistracy and police, by contrast, it was a day to be dreaded. The Chartist lecturers might have preached against using ‘physical force’ to achieve their aims, but their message nonetheless had the hint of revolution, and worse still was to be made to a large number of disgruntled unemployed colliers.

This was a time when economic depression was cutting deeper and employers were cutting wages. Three weeks earlier, the Shrewsbury Chronicle had reported the ‘Alarming riots and disturbances’ among Staffordshire’s ironworkers, and the authorities in Shropshire were fearful that this unrest would be contagious.  The Old Park Works (near present day Telford Centre) had just reduced wages, and some works were even stopping altogether.  A meeting of Wellington’s ratepayers had been called to discuss what could be done, and at another hurriedly convened meeting that week, Captain Mayne of Shropshire’s county constabulary was having to reassure magistrates that he had “made arrangements should mischief occur”. A company of cavalry stationed at Shrewsbury were not least amongst his ‘arrangements’.

But as Captain Mayne had been meeting with magistrates on the evening of 2nd May, around eight hundred people had been at a very different meeting on The Green at Oakengates. This was the first of three Chartist lectures given to large crowds in Oakengates during the first fortnight in May. Superintendent Baxter of Wellington’s police force made sure his men of C Division kept an inconspicuous presence at each of these meetings, ready for the outbreak of any disturbance – which never happened.

These first meetings may have attracted large crowds, but they would pale in comparison to the demonstration that was to take place on 17th May.  A poster obtained by the local police on Thursday 12th confirmed the details:

On Tuesday morning, the members and friends of the Chartist Association will meet at the infant school room at Coalbrookdale at 8 o’clock accompanied by the Dale Band.

We shall start at 9 o’clock precisely through Lightmoor, Dawley and Dawley Green where we shall be joined by our Horsehay friends and continue our route through Lawley to Watling Street.  Meeting the other associates at 11 o’clock, the procession accompanied by the speakers will then proceed to The Wrekin, where Fergus O’Connor Esq. and other talented lecturers will attend.

As author of the radical Northern Star newspaper, Fergus O’Connor was the nation’s most prominent Chartist, and caused a stir wherever he went.  Two days later on 14th May, Baxter wrote to Mayne that there was “a rumour afloat” that a contingent of Staffordshire colliers would be travelling to the Wrekin meeting, and that the Darbys were to stop their ironworks for the day to enable their employees to attend. 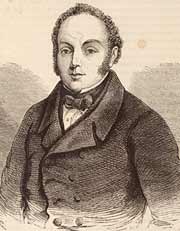 When the day finally came, the great O’Connor was absent. That must have been a crushing let down for the organisers, but his fellow lecturers were out in force – including a Wolverhampton baker, a Geordie mechanic and a Mancunian weaver. They set off from Coalbrookdale with the procession as planned, gathering numbers as it wound its way northwards. The parade was joined at The Cock Posting House (i.e. The Cock Hotel) by a large crowd of people approaching from the Ketley direction. Whether any did indeed come all the way from Stafford as rumoured, we don’t know. By the time the procession reached The Wrekin, the Shrewsbury Chronicle newspaper estimated, its numbers had swelled to up to 10,000. 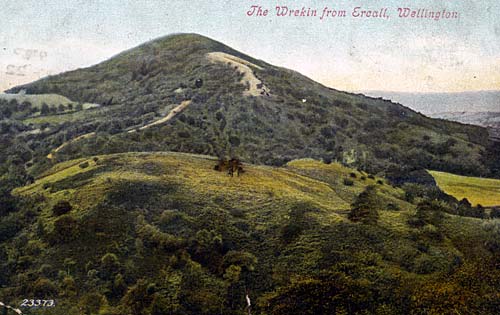 But were all these people committed Chartists? The Shrewsbury Chronicle claimed that ‘the great bulk were mere spectators’ who appeared to ‘take little interest in the political proceedings of the occasion’ at all. This newspaper was the bastion of the county establishment, so it’s not surprising that they should have sought to pour cold water on Chartist successes, but they may not have been too wide of the mark. This “much talked of demonstration” would have excited a lot of interest amongst the people of East Shropshire whether or not they were sympathetic to its radical message.  During the weeks before and after the demonstration, Chartist meetings across the Coalfield district were drawing crowds of between two and four hundred people a time, according to police reports, and yet only a small portion appear ever to have signed up as members.  A lot of people perhaps went along out of curiosity, without necessarily any real desire to listen to lectures on social and political change.

However apolitical their motivation, the multitudes that gathered on the summit of The Wrekin that day were treated to some firey political speeches.  Whilst two of the lecturers kept strictly to the topic of the Charter, others really let their radical juices flow.  Not even the young Queen Victoria and her husband Prince Albert were safe from the critique, the speaker John Mason telling his audience:

“You poor working men that go down into the Bowels of the Earth to get minerals are obliged to pay for making this German boy an Englishman, and while your wives and children are starving, he lives in splendour upon the produce of your labour!”

Some were surely stirred by the radical lecturers, but according to the Shrewsbury Chronicle, the crowds were not as attentive as Mr Mason and his colleagues would have liked.

“Finally, one of their speakers intimated that unless he found a more willing auditory, he would desist from his address and leave the meeting.  This threat not diminishing the confusion, the assembly was suddenly dissolved, but the good humour that throughout characterised the affair was not thereby lessened, the parties proceeding homewards with much noisy fun and enjoyment.”

The Chronicle enjoyed being able to conclude that “the presence of a considerable number of police appeared quite unnecessary”.  Superintendent Baxter would probably have argued it was better to be safe than sorry, but he was no doubt relieved that the whole event passed off peacefully. He wrote that from about 6pm onwards, the spectators began to descend the hill and

“…removed towards their respective homes in an orderly manner, so that by 11pm, Wellington and the suburbs was very quiet.”

And so Wellington slept peacefully that night after all. But there were more big Chartist meetings to come that summer, and as the hard times continued, Shropshire’s colliers were not about to settle down.

What happened next? Find out in the next article.

← Dothill, Downing Street and the dead man who built a Cambridge college
Chartism Part II: the Summer of Discontent →