Dothill, Downing Street and the dead man who built a Cambridge college

In the run-up to the Midsummer Fayre in June, we’re taking a break from the future of Wellington and getting a bit historical for a change. A version of this article appears on the original Wellington H2A website, and also featured in the Wellington News back in 2010. For those who missed it the first time round, here it is again…

For six years, I learnt most of the useful things I know at Dothill – a brilliant primary school on the edge of Wellington. A while later, for three years, I learnt lots of mind-stretching but probably less useful things at university in Cambridge. And now, a few years after that, every couple of weeks I find myself walking past Downing Street in Central London – where I don’t suppose anyone learns anything very useful at all. So how are these three institutions linked?

Downing Street was named after Sir George Downing, first baronet, who had it built in the 1680s. His portrait still hangs just inside the lobby of Number 10. Downing had been a soldier and diplomat under both Oliver Cromwell and the restored Charles II, and by the time of his retirement was an aristocrat grown wealthy on property. Diarist Samuel Pepys wasn’t very impressed with him, however, and described him as a ‘perfidious rogue’. And a few centuries later, Winston Churchill showed he was equally unimpressed when he reflected on the shoddy walls in his prime ministerial home, grumbling that Downing must have been a ‘profiteering contractor’.

But what does all this have to do with Dothill? Well, the year after the Sir George Downing died in 1684, his daughter in law gave birth to his grandson – also to be called George. Another three years later, she was dead and the infant George was packed off by his father to live with his uncle, Sir William Forester, at Dothill Hall near Wellington – on the site now occupied by Dothill Primary School. 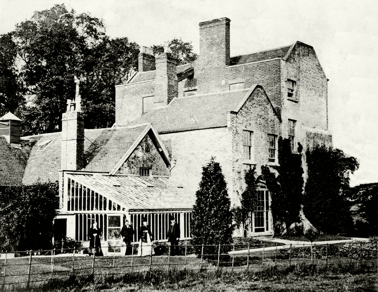 Dothill Hall as it looked in the early 20th Century

The Foresters, descendants of The Wrekin’s medieval caretakers, had inherited Dothill just a decade earlier from their relatives the Steventons, having spent the previous two hundred years at the Old Hall on Watling Street. Sir William was the Member of Parliament for Wenlock and a keen Whig politician who was involved in the movement to exclude the Catholic James II from the throne. Reportedly caught at one stage with a stockpile of weapons at his house, he was heavily fined and forced to cut down all his timber on The Wrekin to pay it. Then in 1688, about a year into young George’s time at Dothill, Sir William finally found himself on the winning team as James II was ousted and the Protestant William and Mary invited to England to take the throne.

We don’t know anything about young George’s childhood at Dothill. Was he spoilt? Was he treated like a son and a brother by his uncle’s family? Either way, Sir William appears to have taken advantage of his young charge, presumably with the Downing family wealth in mind, when he secretly married the 15 year-old to his own even younger daughter, Catherine. Unsurprisingly, this forced union appears to have been firmly against George’s wishes. Still only a teenager, he upped sticks and left Wellington – and indeed England – soon after. Exactly what he got up to while he was away we don’t know, but when he returned home about three years later, he refused to acknowledge Catherine as his wife and they never lived together again.

Image of Sir George Downing, third baronet, by kind permission of the Master and fellows of Downing College, University of Cambridge

Just over 300 years ago, in 1710, George Downing entered politics and became MP for Dunwich in Suffolk. Dunwich was a ‘pocket borough’ – a constituency with a small enough electorate to be under the effective control (or in the pocket) of one major landowner. This was a time before secret ballots, so it was a brave tenant who stood up and voted against his landlord! Whatever you think about the dodgy dealings in modern British politics, remember it’s positively angelic compared to the 18th century.

Dunwich had once been a prosperous town, but had mostly fallen into the sea by the time Downing came along, so that it comprised no more than 44 houses and about 30 voters. Imagine that – one MP for 30 voters, whilst some towns of thousands had none.

George and his Uncle William Forester had, presumably, fallen out over the marriage and his subsequent disappearance. Ten years had passed, but poor Catherine was trapped in a non-marriage, eventually separated but unable to get a divorce, in spite of George’s support. So, it’s interesting to picture the scene in 1710 as Downing arrived for his first day at the House of Commons, his Uncle William, still the Member for Wenlock, sitting somewhere nearby in the Chamber. I wonder if they were on speaking terms.

Whilst briefly out of politics between 1715 and 1722, a 99-year lease on Dunwich (courtesy of The Crown) meant that Downing went on to occupy the parliamentary seat in Suffolk for the rest of his life. It was an age of coteries and factions, rather than political parties, and Downing was described as a ‘loyal but unremarkable’ supporter of Sir Robert Walpole – considered Britain’s first real ‘prime minister’ – and of his successor, Henry Pelham.  His loyalty paid off when he was made a Knight of the Bath in 1732. According to the Cambridge antiquary William Cole, however, ‘for the latter part of his life he led a most miserable, covetous and sordid existence’. Cole doesn’t give details, but maybe wine, women and song had something to do with it. He died at his home, Gamlingay Park in Cambridgeshire, in 1749.

It was, all said, not a distinguished life seen against that of his grandfather and many other wealthy gentlemen of his time, who had the means and connections to achieve much.  In death, however, George Downing’s achievements were more substantial and long-lasting. But it took a while. His vast wealth, inherited from the successful grandfather of Number 10 fame, was left to his cousin Jacob Garrard Downing and his male heirs.  If there were no heirs to inherit, the trustees of the will were directed to purchase:

“some piece of ground lying and being in the town of Cambridge, proper and convenient for the erecting and building a college, which college shall be called by the name of Downing’s College; and my will is, that a charter royal be sued for and obtained for the founding such college, and incorporating a body collegiate by that name.”

So, build a college and name it after me – such modesty! When Downing’s will was approved in June 1749, its trustees were already dead. When cousin Jacob himself died in 1764, without children, and all other named relatives were also found to be deceased without male heirs, the august scholars of Cambridge University turned up to collect their winnings and build a new college. But the remaining Downing family fought tooth and nail to keep the old man’s money, and litigation at the Courts of Chancery slowed things down tremendously.  It was a full half century after Downing’s death, in September 1800, when the charter for the founding of the new college at Cambridge was finally passed. Seven years later, once land had been purchased, the building of Downing College began.

Today, Downing College stands in beautifully landscaped grounds off Regent Street near the centre of Cambridge, set around the largest quadrangle of any in the university. In a city of gnarled, gothic colleges, Downing’s clean and neo-classical lines are refreshingly elegant. When I was at Cambridge a decade ago, it had a reputation as being a friendly, chilled out sort of college where academic standards were nonetheless high, particularly around Law and Medicine.

So, that rich little boy from Dothill might not have done great things for the world whilst he was in it. But as John Cleese, Quentin Blake, Sir Trevor Nunn and the tens of thousands of other Downing scholars since 1807 might testify, he has at least done something useful since.