Last week, I posted about the Chartist demonstration on The Wrekin which took place in May 1842, and which had the authorities on the edge of their seats. But Shropshire’s brush with Chartism – and the economic depression that fed it – didn’t end there. I originally wrote this article about five years ago, but here it is again for those who missed it the first time.

I’ll start with a recap: Chartism was a national working class movement campaigning for the right to vote, equally sized electoral districts, payment for MPs and annual parliaments. It can be seen as part of a long radical tradition that railed against the injustices and costs of the aristocratic establishment – politicians, royalty, the Church of England and the army – and at a time when industrial workers were enduring severe hardship, their message threatened to have all the more resonance. Not only were colliers aggrieved because their wages were being reduced, they also had more long-standing complaints like the exploitative habits of colliery charter-masters (the middle men) and the profiteering of those who ran the Company-owned stores.

At Westminster, the Government was so panicked at the possibility of full-blown nationwide revolution that they ordered what were still infant police forces up and down the country to keep a close eye on any Chartist activity on their patch – and record it diligently. That’s precisely what Wellington’s Superintendent Baxter did, and it’s thanks to his letters, now held at the National Archive in London, that we can revisit that dramatic Summer of 1842.

In the fortnight leading up to the May Wrekin Demonstration, and in the month that followed, the police reported no less than 18 Chartist and Anti-Corn Law meetings in the Coalfield district east of Wellington.

These meetings tended to attract at least 200 people a time, and as many as 4000 at the largest ‘camp meeting’. The lecturers took their show to all corners of the Coalfield, addressing three gatherings at Pains Lane (now St Georges) on successive evenings, three at Donnington Wood, two at Dawley Green, two at Horsehay, and one each at Lightmoor, Lawley Bank and Watling Street (the edge of Wellington). At Oakengates, which was the focus of Chartist efforts, five meetings took place on The Green in as many weeks.

The police tried to keep a low profile at the meetings, but their presence didn’t go unnoticed. After a 4,000-strong meeting at Dawley Green on the 6th June, Wolverhampton orator William Mobb ironically proposed three cheers for Constables Frost, Williams and Jones – the police “spies” in the crowd. Although the lecturers often announced the location of forthcoming meetings, the police always kept their ears to the ground to try and stay ahead of the game. In his letter of 21st May, for instance, Superintendent Baxter wrote to his superior:

“There will be a Chartist meeting at Oaken Gates tonight at which I shall attend, and it is rumoured there will be one on the open ground near the Lock-up in Wellington, but of that I shall know more tonight.”

The following day he was still yet to hear “anything authentic” about a meeting at Wellington, but put eight of his officers on duty there in case it took place. It didn’t.

One of the reasons that officers attended meetings was to report back on the content of the speeches, which sometimes trod a fine line between bemoaning the possibility of social disorder and actively encouraging it. At an Anti-Corn Law lecture on 11th May, the speaker Finnegan told his audience that if the Corn Laws were not overturned, the “floodgates of revolution and revenge” would be forced open and he “trembled for the consequences”.

Another more important reason for the presence of the police was to quell any trouble that might erupt amongst the crowd.  Planning to station a whole division of his men at the Elephant and Castle at Dawley Green before the big meeting on 6th June, Baxter reassured his commander that “there will be no necessity for them to have their cutlasses there.”  That this even needed saying just goes to show that the possibility of major unrest played heavily on in the minds of the authorities.

The Elephant & Castle in Dawley as it looks today

This feeling that the Chartist advocates were stirring up trouble made them controversial characters in the district. According to Superintendent Baxter, writing on the eve of that Dawley Green gathering:

“all the respectable people in the neighbourhood are much opposed to the meeting and there is some talk of preventing them speaking.”

The week prior to that, Coalbrookdale Chartist William Halford had got into a row at the now-demolished King’s Arms in Dawley and received “a severe blow on the mouth with a promise he should have more when he came again.”  This local activist Halford in any case seems not to have been the best advert for the Chartist cause – according to Baxter he was “a disreputable character, having been turned out of the Methodist Society for bad conduct.”

The dusty folder at the National Archive contains no reports from Baxter after early June 1842, but as tensions in the Coalfield simmered, the threat of disorder must have hung like a black cloud over the heads of Shropshire’s law enforcers. On Wednesday 20th July, a “riotous and tumultuous assemblage of persons” set out around Priorslee and Donnington Wood breaking machines and cutting ropes at the various pits.  The same day, two of Shifnal’s magistrates wrote an urgent letter to Captain Whitmore of the North Shropshire Yeomen Cavalry, requesting that he muster his troop of yeomen at Priorslee Hall at 5am the following morning. In the meantime, the Earl of Powis got himself to Shrewsbury and began to raise a force from amongst his own South Shropshire Yeomanry, ready to support Whitmore.

By midnight, the Shrewsbury Chronicle reported, a large part of the county police force was assembled in the “disturbed” neighbourhood. They arrested five men who they determined to be the ringleaders in the dead of night, so that the next day when the trouble-makers returned, “they found themselves without leaders and gradually dispersed.”

By the time the cavalry arrived at Priorslee Hall, there wasn’t much left for them to do. According to the Shrewsbury Chronicle, Captain Whitmore’s troops had no more duty to perform than “the discussion of a bountiful breakfast, which the hospitable proprietor of that mansion had taken care to provide them”. So, not an entirely wasted journey then. 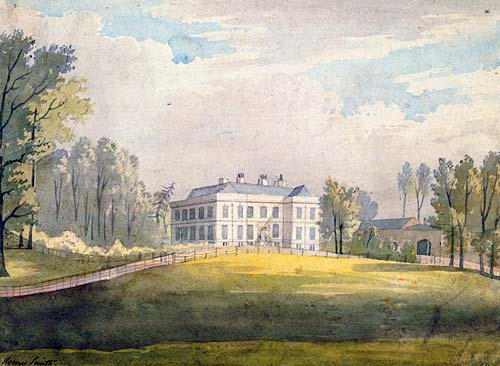 Priorslee Hall – still standing, but set amid a grand car park rather than a grand country park

The Chronicle reports blamed travelling Chartists and unruly Staffordshire miners for leading our “quiet and well-disposed” Shropshire colliers astray. On Wednesday 17th August, two Staffordshire Chartists were arrested, hauled up in front of magistrates in Wellington and jailed. “Though it is all quiet at the moment,” one Chronicle correspondent wrote on 19th August, “all is gloomy and foreboding”. He reported that bands of colliers were wandering the surrounding countryside begging money from the inhabitants, so that keeping the peace in the rural areas was a growing concern.

The authorities in Shifnal were certainly concerned – just the day before, they swore in fifty new JPs. That was a huge number for such a small town, and shows they were preparing for trouble on an unprecedented scale. The new JPs were mostly butchers, grocers, drapers and the like – the ‘shopocracy’ who some Chartist lecturers damned as agents of the rich, working to fleece the poor.

As summer drew to a close, so did the unrest. On 2nd September, the Shrewsbury Chronicle made its last reference to the roaming miners, declaring happily that “the disturbances in Shropshire have now nearly ceased, the simple colliers having discovered the impositions practiced on them by crafty men from other places”. Following negotiations mediated by the Earl of Powis and others, the mine owners had apparently agreed to “take account” of their workers’ complaints in return for them coming back to work.

What happened to Shropshire Chartism thereafter I don’t know; presumably the travelling lecturers moved on, tainted by association with the unrest that had occurred, and perhaps local interest drained away with them. Maybe those newly paid-up local Chartists held on to the hope that they would one day achieve their “rights”. It was a vain hope in the short term, the national fight for the Charter ending in failure in 1849, but the rights it had campaigned for were eventually realised. All but one of their key demands – the election of annual parliaments – is now firmly enshrined in our democratic system, and are taken completely for granted.

In our relatively safe, comfortable age where democracy is a given, this brief local drama of summer, 1842, reminds us that politics was not always so dull, and nor were the lives of our ancestors so easy.

← May 1842: Radicals on The Wrekin
Ten days to go and ten things to do at the Midsummer Fayre →