The Walker Street revival starts here: a view from the future

As the borough council announces it will soon by selling its historic Walker Street properties, I report back from the future to tell you how the street’s turned out three years from now. I’m afraid I’ve broken my own 850 word count rule here, but try to stick with it and see what you think…

And so here we are in spring 2015, three years since the new civic quarter was completed and the council put its old Walker St properties up for sale. For several months that year, pretty much the whole street was looking for a buyer – the Market Company was already trying to sell its Annex building, Royal Mail was selling its depot, and owners of the old tax office and car dealership at the end of the street were also seeking offers from interested parties. Thanks to some entrepreneuring people and a council willing to listen, the scene that greets us three years later is not far off incredible.

We’ll start from outside Rayner’s Opticians facing up the street. Opposite us, nestling in the shadow of the shiny modern civic quarter, is a very different little building: The Horner’s House. Once off-white, run down and forgotten, this restored medieval horner’s cottage now glows in an inviting shade of apple green. Back in the spring of 2012, when it was up for sale along with the rest of Edgbaston House, the Wellington Town Partnership – backed by the History Group and others – proposed opening it as a temporary ‘pop up museum’. Volunteers spent a fortnight decorating the interior. They put together interpretation boards focusing on the medieval life of the area, and arranged a display of archaeological finds that had been unearthed at the property 18 months earlier. Upstairs, local history books, art and crafts were put on sale, the whole place staffed from a pool of about 15 volunteers. 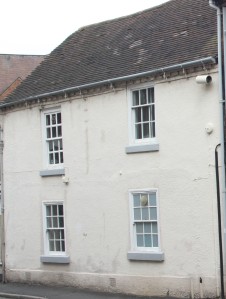 Three years later, that ‘temporary’ exhibition space is a thriving community-run book shop, information centre and gallery. Tardis-like, it has become the HQ for a host of exciting local arts and heritage projects involving 50 active volunteers and funded by 1,000 community shareholders. What’s more, it has been the genesis for the Big Lottery-funded ‘Museum of The Wrekin’, opening soon at the disused chapel on Tan Bank.

So how did this temporary gem become so permanent? The answer in part lies next door at another new addition to the street, The Sun Inn. To say it’s new is not strictly true – rather it’s a very old institution (last recorded in the mid-19th century) that’s had a miraculous rebirth.

Proprietor Paul bought what was then Edgbaston House in Summer 2012, with a view to turning it into a modern version of the old coaching inn it once was.

‘After the Charlton Arms closed, I’d always felt there was a gap in the town’s offer – we needed an upmarket pub and restaurant in the middle of town. This building had the look and the location, not to mention the history, and the town was picking up at that time – so I went for it. I haven’t looked back since.’

Paul had initially been expected to buy the whole Edgbaston House complex, which was available as a single lot. Once he’d seen what a crowd-pleaser the Horner’s House was turning into, however, he spoke to the council and the town partnership about whether they wanted to keep it on. ‘It was one less thing for me to have to work on refurbishing’ he says, ‘and I get so many customers from it, it’s brilliant. It’s not every landlord can say he’s got a mini-museum tagged on to his pub.’

Paul’s beautifully renovated coach house B&B benefits from another slice of culture on its eastern boundary in the form of The New Belfrey Theatre. The old library’s unloved 1960s extension has disappeared and been replaced with a sympathetically designed glass and brick building, which houses the theatre lobby and has rehearsal rooms upstairs. The auditorium lies beyond, fronting onto the new Larkin Way and therefore facing the civic centre. The building, its refurbishment and its new auditorium extension were paid for by the sale of the Belfry’s old and much-loved buildings on the edge of town which have since become attractive apartments. It was a big move to make, but the Trust benefits hugely from occupying a site in the centre of now-buzzing Wellington which allows it to generate income throughout the day and on several evenings of the week. In addition to the theatre group’s own plays, the auditorium is used for small conferences, lectures, chamber concerts, and a weekly cinema. 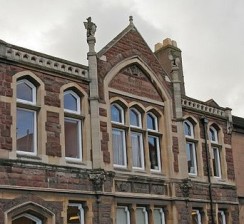 The ground floor of the Edwardian part of the old library is occupied by Artisan, the unusual ‘coffee and crafts’ venue which is a sort of woolshop-come-coffee shop-come social space. This is leased to proprietor Helen, providing the theatre with an important income stream. Rehearsal rooms and a gallery space upstairs also generate revenue, as does the artist’s studio upstairs. This income in turn funds the Trust’s activities and has brought them new interest and new members.

Next to the theatre is Old Brewery Yard, a beautiful development of three renovated Georgian cottages, formerly part of the library, and prior to that the town workhouse and Union Brewery. These are augmented by further housing behind, which fronts onto the civic centre park and forms a pleasant courtyard with the old houses to the rear. The housing continues upWalker Street onto the site of the old tax office buildings, demolished with few tears shed two years ago. In total 30 houses and apartments have been built on this southern side of the street, creating a welcoming gateway to the old part of the town for drivers approaching from Haygate Road. Section 106 money levied from the developer was used to help fund the new arts centre.

Across the road, the former post office depot has been turned into Eyton Gardens, a sheltered housing scheme for older people. The imposing Edwardian post office building has been renovated to create self-contained apartments upstairs (plus lift) and communal space downstairs, whilst the 14 further apartments have been built in the grounds, five of these creating an attractive frontage onto Walker St where once a blank wall stood.

‘We love living here. We’re right in the middle of town, so we can get out to the shops and cafes and everything else very easily. That said, the street itself is fairly quiet so we don’t get noise during the night. It’s like having a little mini-village in the town.’

Alongside Eyton Gardens, and bringing us full circle back to the top of the street, is The Engine Yard. This occupies what was the Market Annex, and takes its name from the building’s earlier incarnation as home of Wellington’s Victorian fire engine. Shops remain in the two units on the ground floor, and a restaurant upstairs. Inside, however, the mix of stalls has changed since the Market Company sold the premises late in 2012. With some of the original stall holders taking up pitches in Market Company property, their old spaces have increasingly been taken up by crafts people – an artist, a wood turner and dress-maker amongst them – who use the building as workshop space all week, opening up as stalls on the town’s four market days.

And so there we have it – an ancient street with a new lease of life. The whole lot could so easily have been turned into a mediocre housing development and been a massive missed opportunity. Instead, we have a community-led heritage project, a fantastic new theatre and arts centre with a buzzing café bar, an upmarket coach house pub, and an emerging craft market that’s nurturing new creative businesses in the town. Add to this a collection of mixed tenure housing which sympathetically knits the street together and you’re left with a new jewel in Wellington’s crown.

Of course, if I’d told you all this back in 2012, you’d have said it was impossible – but it just goes to show what a town can achieve with a few ideas and a bit of willpower.

← Vital signs: what your shop front says about you!
History on the Hoof – or – behind the scenes of Charter Day →

9 thoughts on “The Walker Street revival starts here: a view from the future”