History on the Hoof – or – behind the scenes of Charter Day

I’ve been managing to post at least one article a week since starting this blog in early January, but unfortunately broke that discipline for the first time last week. Some late evenings at work initially got in the way, along with preparations for Wellington’s first ‘Charter Day’ celebrations on Saturday.

As you might have seen from the events page on this site, the idea of Charter Day was to mark the date on which Henry III granted Wellington its earliest known market charter in February 1244 – and to make this an annual fixture in the town’s calendar. I’ve seen from running the Midsummer Fayre in June that parading around the street in a costume generally makes people smile, so Charter Day gave us another excuse for more of the same, and at a time of year when there isn’t much going on in the way of events.

It was quite a lot of legwork to arrange the event, but it wasn’t difficult, and I’d encourage other people to have a go at turning their ideas for events into reality. Events can be a great way to draw some positive attention to the town and get people out to enjoy the place. Provided you’ve got friendly folks to ask for help here and there, and you don’t forget the details, anyone can have a go at making an event happen. To give you a flavour of what was involved in organising Charter Day, and the people who helped, here are a few bullet points on what went on behind the scenes…

Getting the market involved

The greatest visible legacy of the 1244 market charter is, of course, today’s Wellington Market. It would have been strange to host an event called Charter Day that didn’t involve the Market Company, but at the same time I didn’t want to commit to organising things in the market hall as well as in the Square. I emailed the market manager, Kay, and caught up with him in person a week later when I was up in Wellington to discuss my ideas. He was really keen for the market to make the most of it, provided it didn’t require much resource, and so set about promoting it to the traders so they’d be encouraged to come along in fancy dress on the 25th. Posters appeared over the next few weeks, flag bunting went up around the Market Hall, and a bird of prey display was organised for the market yard. On the day itself, there were no doubting the market was part of the event.

This was the easiest bit of all (for me, at any rate). A few months ago I emailed Neil, from the town’s brass band, and asked if his troupe would be available to play for an hour. He checked at their next rehearsal, and replied to say they would. In case of wind and / or rain, I knew they’d need to play under a canopy. I asked Kay, the market manager, if his staff could put one up in the Square and, as partners in this whole event, he said they’d be happy to. The only thing left was chairs for the band. There are stacks up at the leisure centre, where the town council is based, so the clerk organised for a couple of councillors to bring their cars in order to get them down into Market Square, aided by a couple of part time staff who kindly stayed on beyond their normal Saturday morning hours to help clear away – a big thank you to them.

I knew the original 13th century text was in the National Archives in Kew, buried in a much larger document utterly unfathomable to a lay person like me. The version I read aloud was the result of an email to local historian Allan Frost – he had access to a translation, and kindly wrote me out a version that was abridged (and in modern English). I transferred this into a parchment-coloured print out, which I rolled up and wrapped up with a red ribbon that the town clerk found in his office.

So, who was going to be the idiot on the horse? I decided fairly early on in the planning that it may as well be me, unless anyone else offered (which they didn’t). This was partly because it seemed easier than finding someone else to do it and partly, if I’m really honest, because I liked the idea of getting tarted up like Errol Flynn and getting everyone’s attention.

The big stash of costumes I’ve built up for the Midsummer Fayre are almost all Georgian, so about 500 years too modern for a 1244 messenger, but some early purchases from an old theatrical suppliers included a green tabard that fitted the bill. A white shirt underneath and a brown belt round the waist were easy to find, the Robin Hood-style hat was crafted by my very talented cousin Helen, and the boots, whilst they looked pretty medieval, were a pair of souvenir cowboy boots my granddad picked up from Wichita in 1969. Sorted. The russet-coloured corduroy trousers, at £32 from Next, were a bit of an extravagance, but they were a great medieval colour, and I think I can get a bit of wear out of them in trendy East London night spots, so it’s a cost I’m willing to absorb.

I am not a rider, nor do I have many riding friends. So, I was starting pretty much from scratch, and sent some emails to local riding schools and livery businesses. A helpful guy called John called back to suggest he put me in touch with someone he knew with a suitable horse. Later that day at work, just as I put the phone down on a director of public health, I got a call that started ‘I’m Linda – I’ve got a horse.’ It wasn’t the usual sort of call I get at work, but it was the best one I took that week. With less than a fortnight to go until the event, this was the big, horse-shaped missing piece of the jigsaw.

I arranged to go over to Linda’s stables the day before the event to meet Mac, my steed for the morning, and Sophie, who was going to lead me into the Square.  Linda and Sophie were very welcoming, and said flattering things about my novice riding when I had a go. Bear in mind these were people I’d never met before who were not being paid for any of this – they were just helping out. Without them, I’d have had to resort to getting a town councillor to run alongside me clacking two halves of a coconut shell, which wouldn’t have been quite such a spectacle.

Setting up the Court Leet

The Court Leet would have met in Wellington from the Middle Ages through to the early 19th century, dealing with the business of the town including the appointment of key officials like the ale taster. I thought it would be fun to revive this court for the purpose of ‘appointing’ the new ale taster (Jerry Baily) and, to beef it up a bit, a couple of other officials to – namely the town crier (Percy Simmons) and the clerk of the market (market manager Kay Boakye).

Jerry was already primed for this bit of pageantry and Kay was willing to be talked into it. Percy, an incredible 89 years of age, would usually have been raring to go but, having suffered the loss of his wife about a month ago had, naturally, cleared his engagements for the time being. The day before the event, I called round to see how he was, and tentatively offered him the chance to change his mind and take part if he felt as though he wanted to. I wasn’t sure if I should even ask – I didn’t want him to feel any pressure, but I also wanted him to know how much we valuable him in the town and how much people like to see him – and I thought it might be a nice occasion for him to start to get back into the swing of things.

I showed him the text I’d written for him to read, should he decide to come. In typical style, he said, ‘Well, I’d change that bit for a start,’ and proceded to re-write the lot. I had a feeling I’d see him the next morning in Wellington, and was so pleased when I did. We all were. It wouldn’t have been the same without him, and for me, seeing Percy take part was one of the highlights of the day. 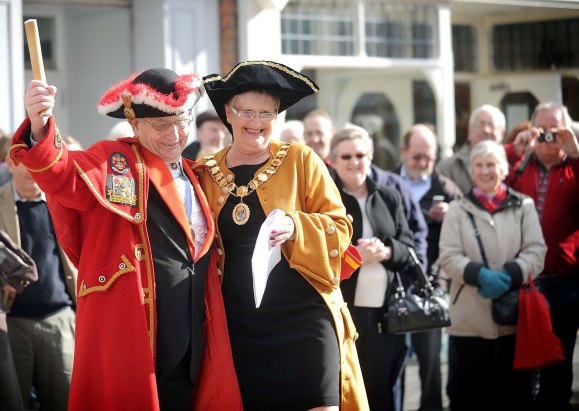 I asked a few people to play jurors, and the four we ended up with were a great mix. We had an ‘innkeeper’ (Pete Arden of the Cock Hotel); a market trader (Lesley Arrowsmith), a ‘country yeoman’ from nearby Admaston (Geoff Watkiss) and to give at least a nod to modern democracy, the mayor (Lesley Street). I kitted them all out in Georgian costumes to add a bit of colour to the procedings and, perched on sturdy wooden chairs borrowed from The Beacon pub, for about ten minutes they sat in mock-judgement on the three officials presented to them.

As each official was confirmed in their post, some sort of ceremonial presentation was made: the keys to the market for Kay; a deed of office for Percy (I wanted to present him with his bell, but he’d already been ringing it all morning so that felt daft); and a tankard and gown for Jerry. Jerry’s gown was an exquisite piece of work, made by the very able seamstresses Joy and Margaret, formerly of Busy Bees Woolshop – another reminder of the talents we have in our midst.

Charter Day was not a big event – just a fun bit of pageantry on a February lunchtime. People smiled. They laughed. They even shouted ‘God save the king’ when I did. At one point it was almost like theatre-in-the-round, with these 80 or 100 shoppers encircling the activity. It was a lovely thing to be part of, and I hope we (not necessarily me!) can do it again in future years.

And the cost of all this great publicity and merry-making? Well, aside from cost of the material for the ale taster’s gown – which will last us a good many years – it came to just about zero. Which goes to show, you don’t necessarily need a lot of money to put on a colourful event like this – just some helpful people willing to lend a hand. So, if you’ve got a new event in mind, sound out friends, businesses and the town council, and make it happen!

← The Walker Street revival starts here: a view from the future
Operation ‘Paint the Town’: putting some colour into Wellington’s cheeks →