It was energetic. It was busy. It was simple. Last week’s Ideas Farm showed us what Wellington is made of…

Local resources. What are they? When councils talk about resources, they usually mean their own – and with public sector budgets squeezed like never before, there’s not much to celebrate on that front at the moment. Luckily, there’s another, enormous pool of resources out there in Wellington, and that’s people. Sometimes they just need a reason to meet and start talking. At last Saturday’s Ideas Farm, about fifty of them turned up and did just that.

As we’d kept saying in the weeks running up to this event, it was NOT a consultation – no one was presenting any plans for comment, or putting any money on the table and saying ‘how shall we spend it?’ This was about starting with the people in the room and asking ‘what can we ALL do to make our town the place we want it to be?’

After some introductions and scene-setting, we got cracking on the conversations that everyone in the room had come for – conversations about the projects we thought could brighten up the town. That was pretty much it by way of an agenda. There was no chair, no committees to be formed, no sitting around a big table speaking one at a time. This was a workshop and people got down to proper work, with genuinely inventive and thoughtful conversations about what we could do and how. 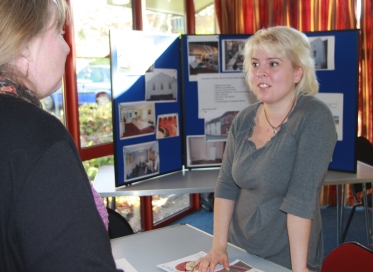 When I’d asked who was interested in talking about a new arts and performance venue, most of the hands in the room went up, reflecting just how much the future of the old Clifton Cinema has galvanised local enthusiasm since Dunelm shipped out a few months ago. There were so many people interested in this topic that it generated two groups. There was also a group keen to talk about festivals and events, one who talked about creating new arts or heritage exhibition space, and a couple of individuals who got stuck into a conversation about helping shops improve how they present themselves.

After an hour of intensive chatter and note taking at tables, people were invited to share some headlines with the rest of the room. It was clear these had been good conversations. As a facilitator, I’d been given an easy ride – groups managed their own conversations and captured their own notes.

The feedback on the day was fantastically positive, and has continued over the week since. Emails are flying around between people who met at the event, as are Facebook posts and Twitter messages. This workshop was, as intended, just the start. Projects are starting to take shape with further meetings planned by various people, but there are surely more ideas out there and more people wondering if they’re the only ones who’ve had them. You’re probably not. So find each other and start talking – here if you like, we’ve got comments boxes.

Plus – if you want to be added to the mailing lists that are rapidly growing out of all this, let me know at threeniceslices@hotmail.com . I’m not in charge of any of the projects, but I can help put people in touch with each other.

For tips on running your own, see the follow-up post on ten steps to making them work

← Wellington postcard from the future [No.2]
Ten steps to running your own Ideas Farm →

5 thoughts on “Carry on Farming”