Making the most of 2016: Wellington Makers’ Project

What is your town known for? What marks it out from other places? Some towns have a ‘thing’ which makes it easier to answer that question – Ludlow has food, Ironbridge has museums (and an iron bridge, obviously), Bishop’s Castle has arty bohemians, and further afield, Hay on Way has bookshops. There are only so many ‘things’ to go round, however, so for most towns, pinning their hopes on one star attraction is probably fruitless.

So what about Wellington? The most important thing for us is to articulate what makes our offer different to Telford Centre, as this is the main centre for shopping and increasingly leisure and night time spend in our area. We can’t compete like-for-like, so we have to tell a different story. If Telford Centre can plug you into a world of international brand consumerism – with all the global supply chains (and carbon footprint) that this entails, then Wellington can’t just be a pale, low end version of the same.

So let’s start with a different idea. Let’s start with the simple idea that Wellington has always been a place where things are made as well as just bought and sold. For me this is more compelling than an identity built vaguely on ‘independent shops’ – valuable as they are – because increasingly, the products you can buy from independent shops will be available somewhere online or in more savvy nationwide stores. But if something is MADE here, in the town, in the place where you buy it – well that’s something worth talking about. Moreover, if the act of making is something you can take part in yourself – craft clubs in a church hall, cooking classes in the back of a restaurant, a day at the brewery  or throwing a clay pot – then suddenly you’ve got a whole set of social and creative experiences coming to light as well.

This thought was the starting point for H2A’s Makers’ Project, which we turned into a bid to the borough council’s Pride in Your High Street Fund last year. We heard recently that ours is one of the successful bids – so it’s all go. And what will this project comprise? Read on…

1. A Makers’ Guide to Wellington

One part of the project is to create a guide to the town’s maker businesses. For instance:

So – a professionally-designed printed guide to these makers and others will be one output from the project. There will also be an online version, hosted on a brand new Wellington website, which could look something like this (which is just my amateur’s mock-up)…

The second element of our project will see the creation of around ten murals to be installed in a series of ‘false windows’ around the centre of the town. We’ll be approaching property owners and businesses with appropriate spaces on the sides of their premises – a bricked-in recess, or a gap where a window could realistically go. These murals, painted by professional mural artist Paula Woof, will depict characters from Wellington’s making past – craftspeople, creatives and manufacturers from throughout the town’s history. 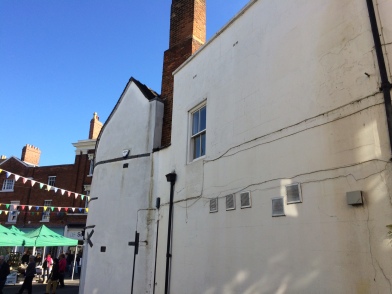 Some possible sites for our painted windows?

Imagine a medieval horn-worker smiling out at you from the 14th Century cottage where we know he would have lived and worked (on Walker Street); or 17th Century bell-founder Mr Clibury giving you a wave on Church Street. Look up and you might see 18th Century artists, a 19th Century brewer or a 20th Century toy-maker. There are lots of people we could feature, so it’ll be difficult to choose, but we’ll be asking people for their suggestions. Our friends at Wellington Local Agenda 21 and the History Group will hopefully be able to help us with that process. 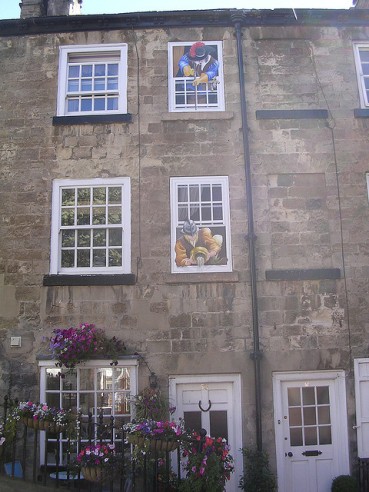 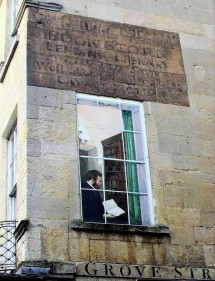 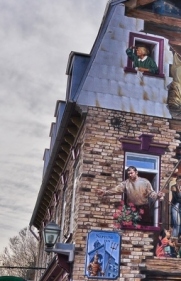 Examples of painted windows in other towns & cities

Will this mural trail radically impact on Wellington’s future prosperity? I don’t suppose so, and certainly not on its own. But it’s one way we can help to inject some character and creativity into the streetscape – one way to make the experience of being in our town more fun, more interesting, something which lifts people’s spirits. And we hope this attention on buildings kick-starts a bigger facelift – shopfronts repaired, paint-jobs undertaken, signs replaced.

There’s no magic bullet for any town trying to succeed in a changing world, and Wellington isn’t any different. But there are tools we need to pick up and use – our history, our buildings, our small businesses which offer something a bit special or a bit different, and the clubs and activities which make our town more than a set of commercial transactions. Through the Makers’ Town Project, we want to use these tools in a way that starts to get attention and build momentum. We believe that from those ancient craftsmen to our modern-day micro-brewers and potters, there’s a story to tell which isn’t just about the past. In the telling of it and the celebrating of it, we can all help to write the next chapter – so let’s make it a good one.

← Get ready for a very Wellington Christmas
Organising a summer event in 2017? Let us know! →

10 thoughts on “Making the most of 2016: Wellington Makers’ Project”