You know you’re in Wellington when…

How would you finish that sentence, jokes aside? And how would you LIKE to be able to finish it? In other words what, ideally, would be the things that mark our town out as different to others?  In other towns it might be a famous or prominent building – a castle, a cathedral or similar – that marks it out. Here in Wellington we’re pretty limited on that front. But sometimes it’s more modest features that help generate a sense of distinctiveness in a place; a series of little things.

I’ve talked before about distinctiveness on this blog, not because Wellington is more special than anywhere else, but simply because in an age when supermarkets and retail parks take most of us OUT of town for our shopping, the very fact of being different and memorable – of having an identity – is itself something that any small town has to strive for to bring people IN.

I’ve just got back from a long weekend in Northern Spain, which got me thinking. Spain, like a lot of European countries, presents visitors will a lot more regional variation that we tend to see in England. Yes, different parts of our country have different accents, different traditional foods, different traditional costumes or musical styles, but they’re rarely as visible here as in places like Spain. There are lots of historical reasons for this which we don’t need to go into here, but shouldn’t we do more to make our towns and counties memorable?

You know you’re in Wellington when… you walk down the street and there’s some sort of market or music performance bringing the place to life.

It would be great if that was how Wellington was known – a place where there’s always something going on. I was impressed in Oviedo how bustling the streets and squares are – cafes and bars spill out (in a way that adds to their appearance, rather than looking like clumsy encroachment as it can here) and markets add colour and movement.

In part these European places have the advantage of better weather, but not always – the climate in northern Spain is not so different to England, yet in the summer in particular their markets make the most of the good weather they do have.

Sounds in The Square has been H2A’s attempt to bring the streets to life in Wellington, and the Market Company has recently re-started the monthly farmers’ market, so that’s another step in the right direction. But we should be doing more – let’s invite buskers, travelling continental markets, open air street theatre, folk dancers and more.

You know you’re in Wellington when… you have your photo taken with the “The Writers’ Block” sculpture outside the library, sitting yourself between Philip Larkin and Hesba Stretton.

That’s just one idea for a sculpture in Wellington. We don’t have any, yet sculptures are something you see a lot of in Spanish towns – not just ancient bronzes of famous local worthies, but more recent additions that celebrate town crafts, trades and local characters. 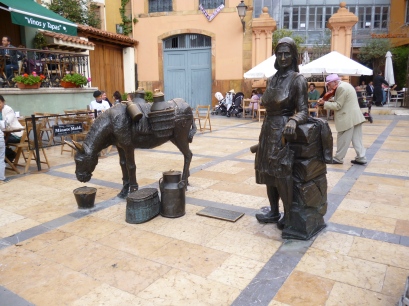 In Oviedo at the weekend, I saw sculptures of market traders with pack horses, a group of fishwives and a deceased local tour guide on a bench. They are the things I will remember most vividly from the town. Some people might think sculptures are frivolous, but they make people smile, they provide a bit of a focal point in public spaces, and passers-by have their pictures taken next to them.

You know you’re in Wellington when… you see the same icon emblazoned on all the benches and lamp posts.

In Gijon, another town I visited in Northern Spain this weekend, the lamp posts and benches are adorned with an image of an ancient king of the region. In plenty of English towns you see something similar, often a town crest. Wellington has a crest of its own we could sprinkle around the place a bit more liberally, although as a relatively recent creation – it was made official about 60 years ago – there might be other images to go for. The foxglove, representing local doctor William Withering’s most important discovery, would be one obvious one. Another would be the Wrekin Giant (or alternatively the cobbler) –in fact that was a suggestion that came up as part of Ideas Farm recently. What do you think our civic icons should be?

So, there are just a few thoughts. Britain is not Spain or France or Italy – our culture is different and so are our towns. But there are lessons we should take in celebrating the things that make our towns interesting – in Wellington as much as anywhere.