An update from your friendly local ale taster

Jerry Baily was appointed Wellington’s ale taster earlier in the year. During his two year term, he’ll be promoting local food and drink – that means encouraging the town’s businesses to stock it and we customers to buy it. In the second of his updates, he tells us what he’s been getting his teeth into of late…

It is now over 2 months since I became the new Ceremonial Ale Taster of Wellington: what have I been up too?

During March I opened (along with MP Mark Wright) the sensitively refurbished ‘Elephant and Castle’ in Dawley: I have known John and Tanya Ellis (new owners of the said public house) for many years and fully expect this Real Ale venture to be as successful as their first pub, The Crown Inn at Oakengates. 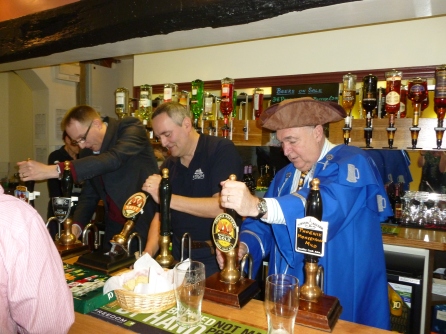 On Saturday 21st April my cape came out again: this time I helped promote the opening of a new café in Wellington’s Market Square. Propriotor Steve Golden explained his business plan of intending to keep his prices the keenest in town; while ensuring good value for money no matter what you order from him or his staff. 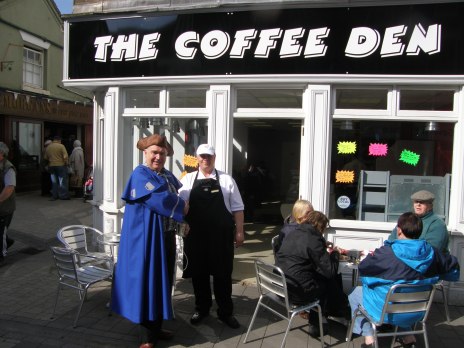 Trips to The Black Country and Eccleshall with the local CAMRA (Campaign for Real Ale) branch saw me imbibing some fantastic beers. A train journey intoWalesenabled my wife and I too visit the CAMRA UK Pub of the Year at Ruabon: the excellent ‘Bridge End Inn’ was a joy to discover and we’ll be re-visiting again soon. A weekend inLondonwas also fitted in: my son’s engagement party, a couple of markets and a pub crawl made the time fly by, emptying my wallet even quicker though.

My drinking within the boundaries of Wellington (without cape) during the last two months has seen me use a variety of the town’s public houses, and with the following positive observations:

All six pubs mentioned have something an Ale Taster can recommend and I hope whoever reads this considers visiting at least one of them soonest.Wellington’s pubs need support and it is the people ofWellingtonwho must use them: or you’ll lose them!

I’ve also noted that both ‘The Eastern Balti’ and ‘The Taj Mahal’ in Wellington are stocking bottles of Shropshire Lad (Woods Brewery, Winstanstow) as an alternative for their customers: I was really pleased to see this and have obviously availed myself with one on each visit since discovering the fact.

2 thoughts on “An update from your friendly local ale taster”