Once upon a time, brewing and bottling were big business in Wellington. From their grand 19th century buildings, the Wrekin Brewery and Shropshire Brewery churned out beer to pubs all over the county and further afield. Today it’s a different story – Wellington folk certainly like to drink it, but you won’t find us making it… unless, that is, you visit Ken Finney’s garage. 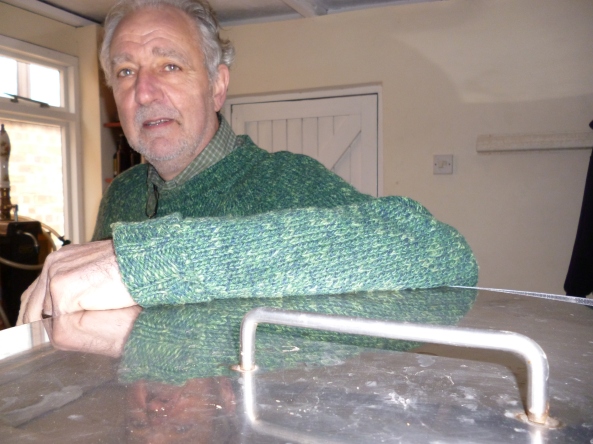 By day, Ken is a maths teacher, but by night, he is a brewer. He first started home-brewing using brew-kits about 30 years ago, but since then, his knowledge and aparatus have become rather more sophisticated – so much so that he is licensed to sell his beer by HM Revenue & Customs.

‘I’ve always been fascinated with brewing. There’s a romance about it. It’s this very ancient process which takes natural ingredients from the earth – water, barley, hops – and through harnessing natural processes, turns them into the fantastic drink of beer.’

I’ve enjoyed many a Ken Finney pint in the last few years at H2A ceilidh nights, at barbecues, at one of his daughter’s weddings and at my own 30th birthday in North London last year. Be assured that Ken is no amateur dabbler – his is a real ale that any town would be proud of. So how does he make it?

Taking me into his garage – which is perhaps Wellington’s only licensed micro-brewery – Ken carefully talks me through the brewing process. We start with the mash tun, one of three large urns sitting side by side. In here goes the malt, which is mixed with water to extract its sugars. This creates ‘wort’, which is the fermentable matter. The mashing stage lasts for around one and a half hours, at which point the wort is run off into the kettle – the second large urn – and heated to boiling point. The hops are added and the whole thing boils for an hour, during which time the bitterness of the hops is reduced. Just before the hour is up, in goes another lot of hops to give the beer its aroma.

Having boiled, the liquid is run through a chiller to cool, ending up at around 20ºC. It then goes into the fermenter (the third large urn, wrapped in a duvet to help regulate the temperature). Here, the yeast works on the wort and lots of clever chemical reactions take place, at which point I admit getting a bit lost in the science. Fermentation takes place over a number of days, with Ken testing the ‘gravity’ of the liquid using a glass hydrometer and making detailed notes in his log book. Once this part of the process is complete, the fermented beer is passed through a chiller unit and put into barrels where it is left to condition for a week or two, at which point it is ready to drink.

What next for Ken?

Commercial microbrewers can run on anything from a five to a sixty barrel brew-length. Ken’s micro-brewery, by contrast, has a modest half-barrel brew length. Even so, that means it could still turn out four barrels (36 gallons) a week at full capacity, which is a lot more than he currently produces.  So does Ken have ambitions to up his production and bring Finney’s to a wider audience? He looks thoughtful for a moment.

‘I would like to do more, yes, but I’m also a bit lazy… if someone came along and said to me ‘I’d like to sell this at my pub and I’d like you to make more,’ then I’d be keen. For the time being, though, I’ve enough to supply everyone who wants it, so I keep going as I am.’

Without wishing to make work for Ken, I do hope someone turns up and makes him that proposition. In my experience, his beer is consistently excellent, and stands up to that turned out by many a commercial micro-brewery.

On my little list of things the complete market town should have, brewery is one of the items – and with micro-brewery earnings and market share increasing year on year, even in the current climate, there’s never been a better time to get one started. In Ken, we have the man to lead the way, if only we can convince him. In the meantime, Finney’s Ale remains one of Wellington’s best kept secrets, and is a rare treat worth looking out for.

← Fruit & veg versus health & safety (and why a little bit of clutter does you good)
Take your partners: what does the ‘co-operative council’ mean for us? →